LEVAIn mediaeval French, LEVANT means the place where the sun rises, i.e., the “East”. As a traditional route for trade between East and West in the Middle Ages, the LEVANT region covers the present-day countries of Israel, Lebanon, Palestine, Syria, Turkey, and Egypt. Historically, LEVANT played an important economic role in the trade between Western Europe and the Ottoman Empire. 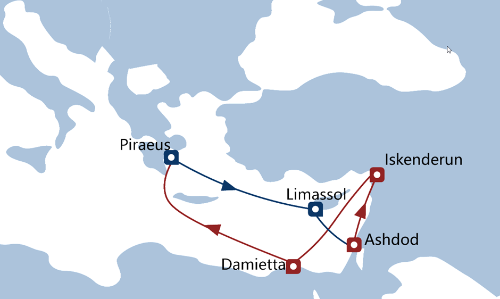 The launch of LGX1 will again connect the trade channel between LEVANT and the West, and further improve the route network distribution of COSCO SHIPPING Lines and Diamond Line with the Port of Piraeus as a hub to the East. Relying on the unique geographical location of Piraeus, the LGX1 route has optimized the cargo transfer between Asia, North America, Northwest Europe, Western Mediterranean, Black Sea countries and the LEVANT region so as to better serve global and regional trade.