On practical cooperation, President Xi proposed that China and Greece should focus their efforts on the following four areas: First, the two sides should seek greater synergy between joint construction of the Belt and Road and Greece’s strategy of building itself into an important international logistics transit hub, build the Piraeus Port into the largest container transit port in the Mediterranean at an earlier date, give full play to its role as a rail-sea intermodal transport hub, and improve the transport capacity of the China-Europe Land-Sea Express Line. Second, the two sides should expand two-way trade and investment, and enhance cooperation in such areas as electricity, telecommunications, manufacturing and finance. Third, the two sides should deepen cultural and people-to-people exchanges. Fourth, the two sides should jointly advance the China-European Union (EU) ties.

For his part, Mitsotakis said Greece will take an active part in the joint construction of the Belt and Road to build the Piraeus Port into the largest port in Europe and promote Eurasian connectivity. Greece hopes to become a gateway for China to enter the European market and welcomes more Chinese businesses to invest and start businesses in Greece, which will strongly promote economic growth and local employment, he said. He also expressed the hope that the two sides will strengthen exchanges and cooperation in shipping, energy, e-commerce, culture, education, tourism and other fields.

After the talks, the two leaders witnessed the exchange of bilateral cooperation documents covering investment, port, finance, energy and education. 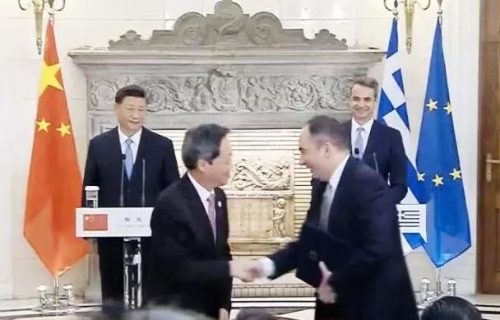 In the presence of President Xi Jinping and Greek Prime Minister Kyriakos Mitsotakis, Chairman of COSCO SHIPPING Capt. Xu Lirong and Greek Minister of Shipping and Island Policy Ioannis Plakiotakis exchanged the Memorandum of Understanding on Successfully Implementing the Master Plan of Piraeus Port Authority S.A. on behalf of PPA S.A. and the Greek government at the Greek Prime Minister’s Office. The Master Plan, which involves investment projects of about 600 million euros, is PPA’s future development goal and blueprint, as well as a requirement to enhance its terminal competitiveness. The signing of the Master Plan will promote the implementation of PPA investment projects. It marks that the investment plan of 600 million euros has entered the implementation phase, and will usher in another new era for PPA’ development. Later, PPA, the European Investment Bank (EIB) and the Export-Import Bank of China (EIBC) exchanged the Agreement on a Package of Financial Services and Financing Guarantee for the Construction of Piraeus Port Authority S.A. at the Greek Prime Minister’s Office. According to the agreement, with financing guarantee provided by the EIBC, the EIB will offer up to 140 million euros in loans to PPA. Mr. Hu Xiaolian, Chairman of the EIBC, Mr. Andrew McDowell, Vice President of the EIB and Mr. Athanasios Liagko, Director of the Board of PPA and a senior consultant of the Hellenic Republic Asset Development Fund State Fund at PPA inked the agreement on the down payment loan of 100 million euros and the agreement on the issuance of bank guarantee of 105 million euros (105% of loan value) on behalf of the three sides.