Container Throughput of Port of Yangpu Exceeds One Million TEU 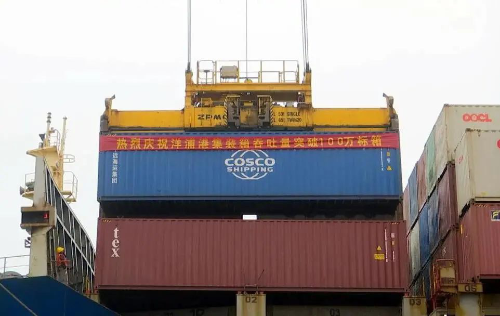 As of December 25, the container throughput of Port of Yangpu in Hainan Province has exceeded one million TEU, marking another significant milestone in the development of the port into a regional international container hub.

Since this year, the port operation has faced many uncertainties. Hainan Harbor & Shipping, a subsidiary of COSCO SHIPPING, has discovered a new path in this ever-changing situation by optimizing production organization and tapping into production potential. The effort succeeded in increasing the Yangpu International Container Terminal’s daily handling capacity from less than 2,500 TEU to more than 4,000 TEU.

Greatly empowered by the new routes, as of December 25, the throughput of Yangpu International Container Terminal has exceeded 850,000 TEU, an increase of 71% year-on-year. Of which, the volume of foreign trade containers increased by as much as 247% year-on-year, ranking among the best in the Beibu Gulf port group and even ports around the country. The increase serves as an important contribution for the port’s overall throughput to top the one million TEU mark.