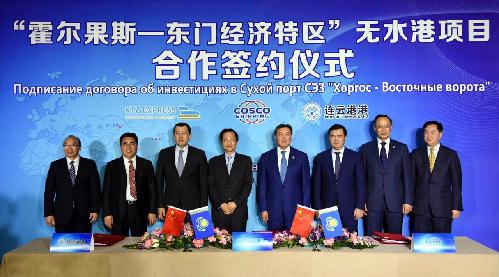 Askar Mamin,the First Deputy Prime Minister of Kazakhstan, Zhenis Kassymbek, Minister of Investment and Development of Kazakhstan, Capt. Xu Lirong, Chairman of COSCO SHIPPING, and Xiang Xuelong, Mayor of Lianyungang city attended the signing ceremony in witness of the signing. Mayor Xiang chaired the ceremony and introduced the first-phase project of the Sino-Kazakhstan logistics base in Lianyungang. Then, Askar Mamin, Capt. Xu Lirong and Kanat Alpysbayev, the president of KTZ, delivered speeches respectively. In the speeches, they expressed that they aim to bring into full play the favorable regional conditions of western land portal of the dry port and the eastern channel of Lianyungang port into the sea combined with the container shipping network and the comprehensive sea-land intermodal transportation of COSCO SHIPPING Lines, a subsidiary of COSCO SHIPPING. By close cooperation and capable management, the dry port in the eastern gates will be built into the important trade corridor linking the Silk Road Economic Belt and the 21st Century Maritime Silk Road as a model project between China and Kazakhstan in the construction of the Belt and Road .  Kanat Alpysbayev, Huang Xiaowen,  Executive Vice President of COSCO SHIPPING, and Ding Rui, president of LPH, inked the agreement on behalf of the three parties The ceremony was also attended by Abdyldayev, Minister of Foreign Affairs of Kazakhstan.

The dry port in Khorgos eastern gates is located in KhorgosEastern Gates Special Economic Zone (SEZ),which is around 15 kilometers away from Khorgos port in China. With a favorable location, it takes five days to Lianyungang and nine to ten days to Europe by rail transportation. The dry port links western Europe and China by railway and highway. It provides services such as transit of container by freight trains, logistics, multimodal transport, warehousing and storage. It is an important logistics point that connects Kazakhstan’s “Nurly Zhol”–“the path to the future” policy with the China-proposed Belt and Road Initiative.

The dry port in Khorgos eastern gates is the first project involving foreign railway resources investment ever since the establishment of COSCO SHIPPING and is also the second project beween China and Kazakhstan in logistics after the Lianyungang logistics base, marking a milestone in advancing the Belt and Road Initiative. The agreement shows a major progress in enhancing Sino-Kazakhstan logistics cooperation from land bridge transport to international land-sea combined transport and global logistics chain. It will boost the economic and trade development between China and Kazakhstan as well as the two countries’ relations. Meanwhile, it opens up a new way for goods from Kazakhstan and other Central Asian countries to be shipped overseas through the port in East China and serves as an important logistics center linking trade routes along the Belt and Road. COSCO SHIPPING will take advantage of the strong network of container shipping and sea-rail combined transport services of COSCO SHIPPING Lines, coordinated with other services sectors like logistics,, in order to build a cross-border sea-rail combined transport corridor together with Lianyungang Port, thus making the dry port in Khorgos eastern gates an important hub for Central Asia and Central Europe land bridge services. Besides, COSCO SHIPPING will integrate the location advantage of the Lianyungang port with shipping network to provide whole logistics solutions of higher quality to customers around the world, thus contributing to the development of China’s foreign trade and the Belt and Road Initiative.