The Inaugural Sail of M.V. COSCO SHIPPING PANAMA through the Expanded Panama Canal 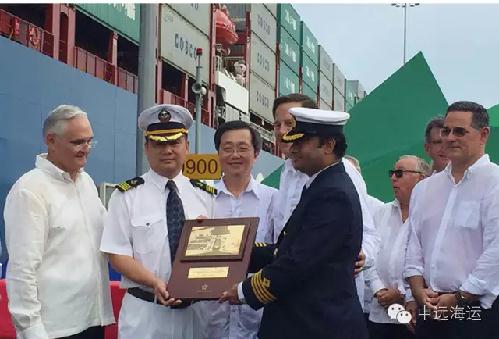 June 26, 2016 marked a significant day in the history of global shipping. On this day, the expanded Panama Canal was inaugurated in a grand ceremony and the MV COSCO SHIPPING PANAMA navigated its way through the newly constructed ship locks as the first Neopanamax ship to transit them.

At 7:00 a.m. on June 26, local time, the welcoming ceremony was held at the new Agua Clara Lock on the Pacific side of the Panama Canal. Over 5,000 people attended the event, including the Panamanian President and government officials, the Administrator of the Panama Canal Authority, members of the Panama Canal Advisory Committee and Board, a COSCO SHIPPING delegation headed by Chairman Xu Lirong, and representatives of the local government of Colon, in addition to workers who participated in the Canal project, and local residents.

Bathed in the morning sun, the vessel loaded with containers bearing the names of “COSCO” and “CHINA SHIPPING”, sailed into the first lock. Captain Jude Rodrigues and Capt. XU Bing, walked down the gangway ladder and received, amid warm applause, a commemorative plaque presented by Administrator Jorge L. Quijano of the Panama Canal Authority. 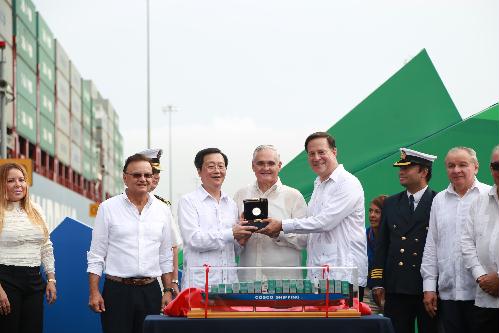 COSCO SHIPPING Chairman, Capt. Xu Lirong told reporters that the expansion of the canal is not only a major development for the Canal, but also a milestone of the global shipping industry. Being selected to make the first transit through the expanded Panama Canal is not only an honor for the vessel and its crew, but for all of COSCO SHIPPING and its employees working onboard and ashore. COSCO SHIPPING is the largest shipping company in the world in terms of comprehensive carrying capacity, and is among the most important Canal’s users. After the expansion, many of the New Panamax ships it owns, including large container and bulk carriers, in addition to tankers, will be able to pass through the Canal and offer more competitive services for customers across the globe. At current, COSCO SHIPPING’s container shipping segment is deploying larger ships to enhance its services to the US East Coast.

COSCO SHIPPING was also a contributor to the new lock construction. In 2014, COSCO SHIPPING’s affiliated company operated MV “XIA ZHI YUAN 6”, shipping eight new lock gates from Italy to Panama, which is half of all gates used in the expansion. Two of the new gates have a length of 58.465 meters, a height 32.65 meters (approximately 11 stories high), and a width of 10 meters. They each weighs 4,232 tons, and are the heaviest and most important new gates in the project. Our successful transportation of these lock gates demonstrates our strong comprehensive strength in the special cargo shipping field.

Capt. XU Lirong concluded, that as a shipping company deeply rooted in Panama, COSCO SHIPPING has committed to actively promoting economic and trade cooperation between China and Panama by being a positive participant and contributing in the globalization process.  At the same time, COSCO SHIPPING strives to become the maritime channel and logistics facilitator to global trade and growth and the important force and cornerstone of Chinese economic emergence within the world. 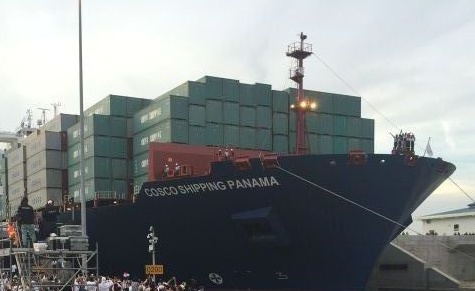 Operated by China COSCO Shipping Corporation Ltd., COSCO SHIPPING PANAMA is the first ship branded with the "COSCO SHIPPING" logo after the foundation of the company. Put into service on January 15 of this year, the ship is 299.99m long and 48.2m wide, with a cargo capacity of 9,443 TEU. Originally named Andronikos, the vessel was renamed COSCO SHIPPING PANAMA as a token of celebration for the expansion and re-opening of the canal. It set sail from COSCO SHIPPING Piraeus Container Terminals in Greece and arrived in Panama on June 24.

Thousands of guests and Panamanian people, witnessed the historical moment when the New Panamax ship sailed through the new lock.